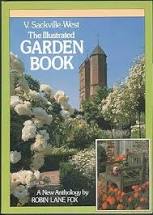 The author of this book was not trained as a horticulturist or designer. Neither was her diplomat husband, Harold Nicolson. Nevertheless, the two of them created one of the most visited gardens in England, at Sissinghurst Castle in Kent, an Elizabethan ruin which they acquired in 1930. The creation of the gardens was a labor of love that lasted decades; their marriage, not so much! The garden was open to the public in 1938 and now run by the National Trust.

West wrote gardening articles for 15 years to help pay the bills. This 1989 book version uses many of her columns, beautifully written, filled with humor and lovely photographs. It is just the perfect book for all gardeners to curl up with during this unusual summer.

Their son, Nigel Nicolson, tells the story of his parents’ unconventional marriage and social connections in Portrait of a Marriage. This book sounds intriguing as well and I have it on my future read list. Once again the “kale song” has hit the top numbers in the hit parade of vegetables. Greeks, Romans, and Europeans have extoled the virtues of this vegetable off and on for some 2000 years. Kale, a good source of vitamin C and cold tolerant down to 10 degree Fahrenheit, was a staple food eaten daily in Scotland. Scottish kitchen gardens were known as kailyards.  If someone was not feeling well it was said they were “off their kail.” Not to be confused with the definition of Kailyard school:

World English Dictionary:  Kailyard school:  a group of writers who depicted the sentimental and homely aspects of life in the Scottish Lowlands from about 1880 to 1914. The best known contributor to the school was J. M. Barrie.

It is believed that settlers brought kale to North America in the 17th century. Kale was popular as a nutritious vegetable to add to home victory gardens during WWII years.

After years of selective breeding of the once wild cabbage, we enjoy the edible leaves of the cultivar known today as Brassica oleracea.

So how did I become interested in kale?  Simply put I was at the Riverside Farmers Market last Wednesday and bought a big bunch of kale for $1.00. Next, while perusing the internet for recipes, to my amazement I found that kale is called a superfood.  Superfood is a non-medical term used by writers to indicate a food with an unusually high content of antioxidants, vitamins, and other nutrients. Kale’s claim to fame includes a high concentration of iron, calcium, and vitamins A, C, and K. And it is only 33 calories a cup!  The list of kale’s benefits is extensive, from my point of view: kale is inexpensive, grain free, sugar free, a good source of calcium for someone not eating dairy, and low in calories. Kale can be eaten raw, steamed, stir-fried and even in smoothies. I was determined to give kale a try.

I made a soup consisting of homemade chicken broth, sweet potatoes, and kale that was delicious.  My husband, who is an avowed vegetable-hater, ate two bowls full. This recipe is a keeper. I tried a few other recipes that were less successful. The kale chips that I baked won’t replace my beloved tortilla chips. Well not the recipe I used. I think I over baked the chips, and they became too bitter.

But last night, while at a party grazing from the buffet table, I heard someone mention the excellent kale salad that Winnie made.  Soon I too was singing the praises of that salad.  It was wilted kale with cranberries and finely chopped nuts with a vinaigrette dressing. I will be asking my hostess for that recipe without a doubt.

Kale is easily grown from seed and survives in full sun or partial shade.  Colors range from cream, green, purple, and black. The plants take about two months to mature, grow about a foot high, and spread one to three feet across. It is not too late to plant a fall crop. To avoid insects or pesticide residue in commercial kale, be sure to rinse the kale well. One source recommends a little vinegar in the water to help clean it.

Saturday, June 21, 2014 Oak Park and River Forest: About 12 homeowners and hundreds of gardeners were fretful about the inclement weather. Would the rain beat down the flowers, would it flood the gardens, would it ever stop? Would anyone attend the Garden Walk on June 22?  As the annual Garden Club OPRF Garden Walk would go on rain or shine, I had my Wellies waiting at the door.
Wellies, or rain boots,  came into existence in 1853 when Hiram Hutchinson bought the patent to manufacture footwear from Goodyear.  Hutchinson, an American, moved to France and built his factory known as “A l’Aigle.”  Hutchinson’s rubber boots replaced the wooden clogs that most farmers wore in the fields in those days. The name “Wellies”  is derived from the leather boots favored by the Duke of Welllington in the 18th Century. Wellies, in the United Kingdom are most often olive green and have the connotation of country living. The rain boots in America came into popularity in the early 20th century and were black and later on yellow in color. The Wellies worn by young people today are for fashion, rather than utilitarian, and come in many colors. ( Just to be clear,  I am not young and my boots are used for waterproof footwear even though they are plaid!)
Happily, all that worry about the weather was for naught. This is Chicagoland after all, and the weather changed dramatically in twelve hours.  Sunday morning dawned bright and beautiful in the villages. Nature, although uncontrollable, was in harmony with our goals. Overnight the gardens turned lush and green and flowers burst into bloom.

Heartfelt thanks go to the twelve homeowners who not only shared their private gardens but their enthusiasm and ideas about what inspired them. Each garden was a work of art and an extension of the owner’s personality.  Much as we might like to transplant their entire secret garden, tranquility and all to our property, it is not possible. At best, we can borrow some ideas and look at decorative objects with a new view. 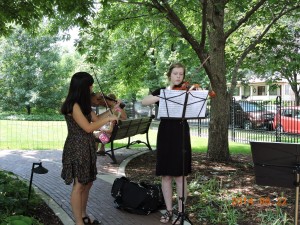 Cheney Mansion was an added attraction for many to the
Garden Walk. Visitors strolled the gardens and woodland waterfall while listening to the beautiful live music provided by high school violinists Julia Swain and Jane Larson. They then found respite indoors for lunch, lemonade, cookies and conversation.
It goes without saying that the success of this joint venture is due to the attendance of our friends and neighbors. Thank you so much for your continued support. We also need volunteers and nominations for new gardens.  We hope you will help us in our future endeavors.
When I receive more pictures, I will post them.
Linda Zwierz, Garden Club of Oak Park River Forest
A note from one of the home owners:

Thank you for the honor of being one of the twelve gardens on this year’s tour.  We had over 200 visitors to our garden (with a house attached) and loved sharing the many flowers with them.The Dutchman’s Pipe, blue Hollyhocks, and water features were the stars of the show. Sharing garden knowledge and secrets of how to plant, propagate, and grow was truly rewarding.
Again, thank you.
Bill and Mary Pat Sieck
707 Clarence
ps
A huge thank you to the three volunteers who welcomed people to our garden!  I don’t know how I could not return the favor next year. 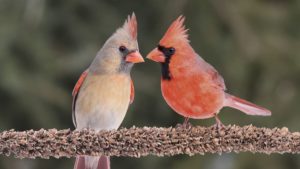